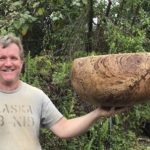 Long before Les Pedersen was a woodturner or artist he spent a long career in construction management, applying his creativity to the construction of roads, subdivisions, and shopping centers.  Though he managed large scale projects, he envied workers who applied their creative minds and hands to their work. Les frequented galleries to admire fine wood turning, “the collaboration between beautiful wood and the creative mind of the artist, crafting graceful forms and fine finishes that turned a block of wood into a work of art.”  At that time Les did not think of himself as  an artist, but unknowing the seed was planted.  The seed germinated after many years when his father sent him a small lathe.  Clueless as to how to use a lathe or make a bowl, the seed germinated and began to grow.  Inspired by the exquisite form of the Hawaiian calabash, Les attempted to make them not knowing this was a very difficult task.  Les believes that starting with the challenging form and refusing to give up eventually led him to his current success.  As wood bowls began to multiply around his house,  his wife Wendy proclaimed, “if you’re going to keep making these, you’re going to have to start selling them!” Les certainly wanted to keep making them and began sharing his creative work at local Farmer’s Markets where he found he enjoyed sharing his work. “There is so much joy in creating pleasure for others,” says Pedersen.  “I had not thought of myself as an artist, but I suppose an artist is one who is considered an artist by those who observe the art.  Surprise, I’m an artist!”