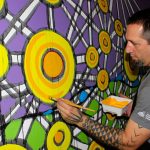 Born and raised on the island of Oʻahu Carl F. K. Pao graduated from Kamehameha Schools in 1989. He earned a BFA at the University of Hawai`i at Mānoa in 1994, with an emphasis in Ceramics (Outstanding Senior Ceramic Student Award).  Carl received his MFA with first-class honors in 1999 from Elam School of Fine Arts at the University of Auckland (Aotearoa), New Zealand. He returned to Hawai’i in 2000 to take his current full-time teaching position at the Kamehameha Schools High School in the Visual Arts.

In 2018, Carl transferred to the Keaʻau campus.  Outside of his teaching schedule, Carl continues to create his own art.  He recently initiated a series of growing exhibits based on the Hawaiian concept of Maka with the most recent, Makahā 2016, successfully showing at the Arts at Marks Garage.  Carl was the inaugural Artist in Residence at the Australian National University (ANU) College of Asia and the Pacific in July 2012; concluded a successful group exhibition at the Smithsonian’s National Museum of the American Indian in July 2011; was co-owner/operator of the lodestar collective gallery in Kailua; the volunteer Arts Editor for The Contemporary Pacific journal (TCP) from 2008-2011; host and co-producer of the educational art series Art Hunter.

Carl also works on various commercial and private art commissions.  He lives with his wife and daughter in ʻOlaʻa on the island of Hawaiʻi.

View more work by Carl F.K. Pao by visiting his page on our online store here.