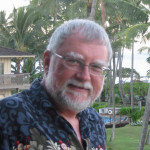 A passion for capturing travel and landscape images fueled Paul to teach himself the art of photography. The Hawaiian Islands have been a rich source of cultural as well as lava and seascape images when not traveling abroad. He and his wife Arlene have made their home in Volcano since 1988. He has been a photo-contributor to many local and community publications, as well as a freelance writer and photo-illustrator for a variety of national and international publications. His photo credits include The Atlas of Hawaii (3rd ed.), Hawai’i Magazine, The New York Times and Los Angeles Times Travel Sections, Elle, Scientiﬁc American, and Travel Holiday magazines.

For the past three decades, Paul has been focusing upon the “universal architecture of the night, dusk and dawn lava ﬂows of the Kilauea Volcano juxtaposed with heavenly bodies…comets, constellations, planetary conjunctions, lunar and solar eclipses”, forming images he calls “Astro-FLOW- tos”. This genre is comprised of low-light, long exposure images. His signature images of the 1991 total solar eclipse over Hawaii with the lava ﬂow used multi-lens, in-camera double exposure techniques.

Paul has been a past Director of the Big Island Art Guild, President of the American Society of Media Photographers, Volcano Art Center Board of Directors President, and afﬁliated with the UHH Conference Center as a cultural and natural resource lecturer and guide. He is currently the Executive Director of Recycle Hawai‘i, a non-proﬁt educational organization, as well a professional educator and administrator. We also know him as a blues harmonica virtuoso, Tips Mahalo (his stage name)!