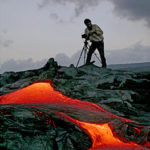 David uses a digital SRL camera with a variety of Nikon lenses.

All photos are captured in a RAW mode, which is the digital equivalent of a film negative. RAW mode allows the greatest latitude for adjusting the photo when necessary in much the same manner as would be used in a traditional film-based darkroom.

No filters are used when the photo is taken in the field and the only manipulations made to the RAW photographs are to correct for the photographers perceived flaws in the original exposure and/or print quality.

Any such corrections are limited to changes in the contrast, color saturation, exposure value, or sharpness of the original RAW photo in an effort to best represent the eruptive activity as it appeared at the moment when the photo was taken.

Under no circumstances are features resembling a face or other manifestations added to the photo by using digital trickery or by manipulating the lava in the field.

As David sees it, “my goal as a lava photographer is to channel the constantly changing artistic magic of Madam Pele into a visually and emotionally stimulating moment preserved on paper. I have always found inspiration in the colors and patterns that occur in nature, and the lava flows of Kilauea provide an endless and constantly evolving subject matter. With luck and persistence I have been fortunate enough to be in the right place at the right moment on many occasions and I hope that my photographs do justice to the spirit of Pele.”