Ira Ono grew up in Brooklyn, New York and graduated from the prestigious High School of Performing Arts with a major in dance. He earned a BFA in painting from the Tyler School of Art, Temple University in Philadelphia and then received a Max Beckman scholarship to study sculpture at the Brooklyn Museum School. He has since made study tours in Japan, Korea, Hong Kong, Taiwan and Europe.
In 1968, Ira visited Hana, Maui on a vacation and decided he couldn’t go back to life in Brooklyn. He cofounded the Hana Gallery, resurrected the ceramics department of Hui No‘eau Visual Arts Center, and co-founded Touchstone, Maui’s first craft gallery–while continuing to choreograph and perform dance and to make art. In 1980, Ira moved Volcano Village and has been active in the Big Island’s art and dance communities, founding Volcano Garden Arts in 2003. His work can be found in galleries from Norway to Japan.
In 1984, he created the Trashface Collection© of jewelry which incorporated recycled items. Its success inspired Ira to organize “The Trash Show,” an annual exhibit showcasing inventive pieces made from recycled materials. He now coordinates Trash Shows on O‘ahu and Maui as well as on Hawai`i.
“My work is intuitive and unpremeditated. When someone likes it, it’s usually because something in the piece connects with some-thing in his or her past, making it an artifact of sorts. They may not be conscious of it, but I suspect it has to do with childhood colors, shapes, and images.” 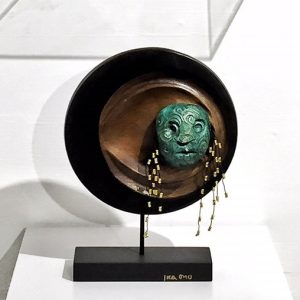 View more work by Ira Ono by visiting his page on our online store here.

EXHIBIT: The Hawaiʻi Nei Invitational Exhibition: The Winds and Rains of Kīlauea    The Volcano Art Center (VAC) is proud to