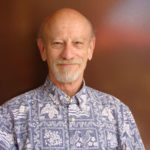 Daniel is almost alone in his mastery of the demanding technique of stone lithography.  Virtually no other artists currently working are able to achieve anything near his subtlety of color and fine detail in stone lithography.  One critic observed that Daniel’s work is united by a “keen observation and attention to detail with virtuoso drawing skills that create a pure and precise vision of the beauty and vulnerability of Hawai’i’s wildlife.”  His numerous distinctions (too many to list here) include being named Hawai’i Audubon Society Artist 1989-90 and Hawai’i Ducks Unlimited Artist 1992 and 1994.  His works are part of the permanent collections of Cornell Laboratory of Ornithology, the Hawai’i State Foundation on Culture and the Arts, and the Honolulu Academy of Arts.  Included in his public and private commissions are the 1997-98 Hawai’i State Conservation Stamp and illustration of the award-winning children’s book “Flight of the Golden Plover”.  After a hiatus on Guemes Island in Washington state, Daniel has returned to Hawai’i and lives in Honolulu.

View work by Daniel Van Zyle by visiting his page on our online store here.