Clayton Amemiya was born in Wahiwa on O‘ahu. He attended Punahou Academy and received a bachelor’s degree in Asian studies from the University of Hawai‘i-Mänoa.

Clayton was introduced to pottery while working at the U.S. Consulate in Okinawa in 1972, when he met Seisho Kuniyoshi who made Japanese tableware at the time. He spent every weekend for the next year at Kuniyoshi’s studio, not getting hands-on instruction, but learning through observation and viewing ceramics in museums, exhibitions and antique shops.

In 1975, Clayton spent six months assisting Kuniyoshi in building and firing the first of his anagama wood-fired kilns. He returned to Honolulu to finish a master’s degree in history, going back to Okinawa to study with Kuniyoshi numerous times. In 1979, Clayton and his family moved to Hilo.

In 1986, he enlisted Kuniyoshi’s help in building his own anagama kiln. Clayton’s anagama is essentially a 12-foot long tunnel, about 4½ feet tall and 4½ feet wide. Hot flames are drawn from one end of the tunnel to the other. Several factors determine the final look of each piece: the speed and intensity of the fire and how each piece is positioned in the kiln where the flying ashes vary the glaze so that no two pieces will look exactly the same. Even though it takes four days to tend the fire, the anagama allows Clayton to get much wider variations in glaze than he could with a gas kiln. He uses Big Island woods; ‘öhi‘a, keawe, koa and lichee, to fire his kiln. 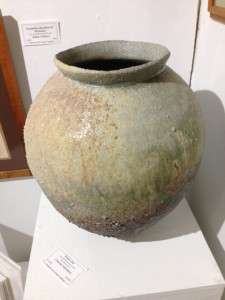 View work by Clayton Amemiya by visiting his page on our online store here.