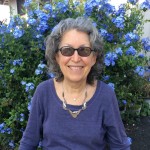 Pat Pearlman has been designing and creating jewelry since 1967. For over 30 years she carved miniature sculpture in wax for casting into silver and gold, accented with stones and beads. Her jewelry medium is now gemstones, using minimal metals. Still a painter and sculptor, she recently did a series of honey calcite carvings. Whatever the medium, she considers herself a minimalist, with an interest in symbolism.
Pat grew up in PA on Lake Erie. She graduated from Syracuse
University with a Bachelor of Fine Arts degree in 1968 with a major in painting and sculpture.
Pat’s wandering nature started in Cape Cod where she began making jewelry. From Marin and Sonoma Counties in California where she had her son Rafe, she migrated to the wilderness of Alaska as well as Fairbanks where she raised him, all the time supporting them with her jewelry and a subsistence lifestyle. Pat fell in love with Hawaii in the early 90’s where she has fulﬁlled her dream of living off the land on her prizewinning organic “Konaroma” coffee farm in Honaunau for close to 20 years.
Pat has received many jewelry honors and awards, including a feature on QVC and Home Shopping Network. She received QVC’s 1996 Best of the Quest award for her Sterling Dolphin Earthstone'”‘ Pin/Pendant. In 1991 and 1989 she was awarded ﬁrst prize in metals in the prestigious Alaskan Earth, Fire & Fibre Biennial Craft Exhibition. Her abstract gemstone landscapes have been honored in Jeweler’s Circular Keystone.