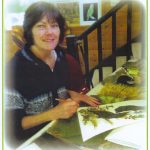 Volcano Village’s own Marian Berger is a first-rate naturalist artist fully deserving of her growing reputation.
Born in Limerick, Ireland, the daughter of a meteorologist, Marian spent her early childhood on Wake Island and in Alaska where she acquired her father’s love of science, her mother’s artistic bent, and her parents’ mutual love of the outdoors. “I assumed that art was a natural part of life, a way that everyone expressed themselves,” she says.
During her teens, Marian focused on abstracts until she took a class at Humboldt State University in representational drawing which “opened my eyes,” as she puts it. After graduating from Humboldt with a degree in wildlife management, Marian moved to the Big Island in 1976. While studying Hawai‘i’s wild rats and working as a veterinary assistant, she continued to paint.
Marian had her first one-woman show at Volcano Art Center Gallery and has had several since. In 1987, she created a series of paintings of Hawai‘i’s endangered birds and plants for the Aston Kaua‘i Resort. An edition of 2000 prints was published, and proceeds from the sales were given to the Hawai‘i Nature Conservancy. In 1988, she painted a number of watercolors presented to U.S. Senator Daniel Inouye and U.S. Representative Daniel Akaka for their contributions in preserving Hawai‘i’s native wildlife. In 2009 and 2010 she won top honors for her entries in the Hawaii Nei shows. In 2006 she was commissioned to do a series of Audubon style paintings of Hawaii’s Living Endemic Birds which she completed in 2011. 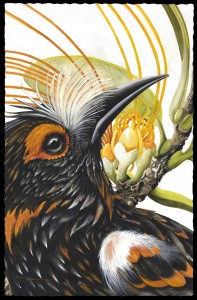 View more works by Marian Berger by visiting her page on our online store here.