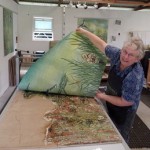 Many of the plants and animals that Margaret Barnaby has so masterfully captured – hapu’u tree ferns, ohia and koa trees, mynah birds, feral pigs – she can see in her Volcano Village backyard. However, the one that she’d most like to see is the ‘alala (Hawaiian crow) which is now extinct in the wild but is being bred and raised at the nearby Keauhou Bird Conservation Center. “Often the prints portray things that I’d like to see combined with real observation. I see a rare plant in bloom and then picture it with an ‘alala flying through the foliage.”
Margaret begins her multiple-plate woodcut prints by drawing and planning for several days. Then it takes her two or three days to hand-carve each plywood plate. Each plate will print one or more colors in the final picture. Depending on the number of plates required, carving can take up to a month. After making several trial copies of the print, she inks the first plate, puts it and the paper through an etching press, and repeats the process to make ten to fifteen copies. She goes through the inking and printing process for each successive color, carefully positioning the plate and paper for each pass through the press. No wonder her prints have small editions. She feels she’s working fast if it takes her only a month from her original concept to a finished print.
Over her 30 year career, Margaret has been a jeweler, a sculptor and painter as well as a printmaker. In the Honolulu Print-makers annual show her woodblock prints were awarded the Jean Charlot prize, the John Chin Young award for Outstanding Relief (2011),and Honblue purchase awards in 2007 and 2011, as well as Hawai’i State Foundation on Culture and the Arts purchase awards in 2008 and 2011. 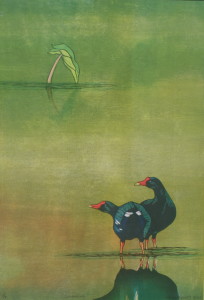 View work by Margaret Barnaby by visiting her page on our online store.