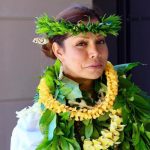 Born in Hilo, Hawaiʻi, Kapuaokalani Kaʻauʻa was raised in the ʻahupuaʻa of Kalaoa mauka on the cliffs of Hilo Pali Kū. Kapua is a native Hawaiian cultural practitioner with over twenty-five years of experience in a traditional hālau setting. After eight years of formal hula training under the tutelage of Taupōuri Tangarō, she went through her ʻūniki rite of passage and earned the title of kumu hula in 2014.  Kapua graduated from Ka Haka ʻUla o Keʻelikōlani School of Hawaiian Language at the University of Hawaiʻi at Hilo with a Bachelor of Arts in Hawaiian Studies in 2017. She teaches hula and Hawaiian language at Ka ʻUmeke Kāʻeo Hawaiian Immersion Public Charter School in Keaukaha where she is affectionately known as Kumu ʻAuʻa. Kapua founded hālau hula Unuokeahi in 2017, and since then Unuokeahi has promoted Hawaiian culture through hula, indigenous leadership, and environmental stewardship for its learners and the community. She created Oʻahu-a-Lua, her hālau on Oʻahu, and Papahana Unuiti at Ka ʻUmeke Kāʻeo PCS. Her teaching also spans globally with workshops and classes in Japan and Hawaiʻi.

Carving is a family tradition for Kapua’s ʻohana. She credits her tūtū, James Kahoʻoilihala Sr., a traditional canoe carver, for leading her to her present vocation. Kapua is a vocal advocate for her people and passionately calls upon others to honor their ancestors through commitment to excellence and understanding of their tradition.