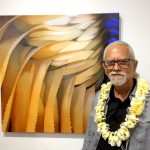 Nelson Makua has been an artist and designer on the Big Island for over 40 years. Born and raised in Kailua, Oahu, he and his ‘ohana moved to the Big Island in 1975, where they reside in Puna, the original home of the Makua ohana. “My ancestors were part of the migration from Tahiti to Hawaiʻi who settled in Kalapana in the district of Puna. For me, moving to the Big Island was like coming home.”

Nelson is well known as a graphic designer through out Hawai‘i, the mainland and Japan. He is a three time nominee and two time Nā Hoku Hanohano award winner for graphic design. He is the only artist to have created 8 years of Merrie Monarch Festival posters with his limited edition “Pele” series. His first 2003 poster has now become a collectors item and his 2008 Merrie Monarch poster received the prestigious Pele Award for best illustration by the Hawaii Advertising Federation. In 2016, Nelson was honored as a MAMo Awardee in recognition of his artistic contribution as a Native Hawaiian artist.

In 1999 Nelson and his son Kainoa, created their line of casual Hawaiian wear under the brand of Nā Mākua. “Nā Mākua gives us another artistic medium and a visual voice to express our cultural views as native Hawaiians through our images.”

Though Nelson began his artist journey honing his skills in drawing, painting and photography, he has been a digital artist for over 25 years and creates his work exclusively on a computer. “The digital age has opened up a whole new world of creating for the artist, with endless possibilities.” Combining his skills as a traditional artist with digital a application allows Nelson to explore new ways to interpret his art. Nelson does not concern himself with a “style” to his art but instead loves exploring many different styles that best depict his vision for that piece. “Guided by my personal history and my kupuna before me, I consider myself a Hawaiian artist living in my own time, creating images that reflect that time and place.”