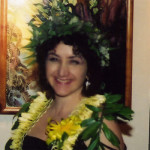 Internationally renown for her Award Winning Watercolour on Silk, Gwendolyn O’Connor’s Art is proudly exhibited in Public and Private Collections in over 15 Countries and 33 of the United States. Raised in the Islands, Gwendolyn is a resident of the Ola’a district of the Big Island. Self-taught in Art, she was influenced by the Art in the Honolulu Academy of Arts on Oahu, the Louvre Museum and Muse’ d’Orsay in France.
“I am deeply honored to have my Art chosen by Art Patrons to commemorate Wedding, Anniversaries, State Department Postings, Births, and Deaths. That my Art symbolizes so many milestones in Art Patron’s lives is humbling.”
She is a member of the American State Department’s Art in Embassies Program. The Paintings “Secret Fire” and “Kona Mangos” have been displayed in the American Embassy in Singapore (2007-2010). The Paintings “Kahana Bay” and “Bouquet for Sandy” have been displayed in the American Embassy in Laos (2007-2010). The Painting “Secret Fire” was printed in the State Department’s 2008 Calendar and sent to American Embassies Worldwide.
Currently the Painting “Hawaiian Sea Arch” is on display (2015-) at the Residence of the American Ambassador in Suva, Republic of Fiji, Republics of Kiribati, Nauru, Tonga, & Tuvalu.
She chooses Watercolour on Silk for its endurance. The Silk also has an effervescent, shimmering quality that mirrors the brilliance of the ﬂora and fauna of Hawai’i.” She uses only the Highest Quality Watercolors and Silk made especially for her, imported from the Orient.
“My Art has always been deeply tied to the Preservation of our Islands. Being aware of who we are as individuals and collectively is vital to our survival. As an adult, I have always been responsible for my personal power use. I have never been tied to the “Grid”. All my Fine Art Giclees’ are made at my Studio in Ola’a by myself using Solar Power. Using State of the Art Technology, Museum Quality Archival Inks and Paper, I Create each Giclee’ while the Sun is high.”
“I feel that Fine Art can remind us, day to day, of who we choose to become, what is at stake, and what we must do to make responsible choices. Acting intelligently is a habit, just like any other. I hope my Art reminds people of the beauty that rewards those who take the time to look for it.”