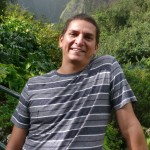 Born on the Day of the Dead in Houston, Texas, Jacob Medina is an artist of Mexican descent living on the Big Island of Hawaii. After serving in the military with stints to Macedonia, Kosovo, and Germany he received his BA in Art from the University of Hawaii at Hilo. His experiences in life have always been mirrored in his art; influenced by the places he’s been, the people he’s met, and his cultural background.

He chooses subjects that relate to both Hawaiian and Mexican cultures, and that cross reference their legends, beliefs and native species in order to make new and intriguing narratives. By cross referencing these two different cultures he is recognizing the ever changing identity of people who come from a multitude of traditions and places, a concept easily found in Hawaii.

“Each piece is a narrative telling an overlapping story of life and death,” Jacob says. “Sometimes my subjects are a simple representation of an endemic animal shown as a single, isolated individual which amplifies the fact that they are endangered. Other works reiterate the life and death cycle in more cryptic or interpretive ways.”

Jacob lives in Kea’au with his wife and many adopted animals.

View more works by Jacob Medina by visiting his page on our online store.