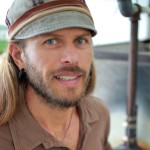 Daniel Moe was born in St. Paul, Minnesota in 1967 where he received his bachelor’s degree in Hot Glass from The University of Wisconsin in 1991. Being drawn by a powerful calling from the Big Island of Hawai`i in 1999 was a key factor to further expand his connection to Mother Earth with his creative glass work.
He currently lives and works in Kalapana where he gets his inspiration from living with the volcano Kilauea just a few miles away from his home/studio. Kilauea is one the most active volcanoes in the world yet its activity is uniquely non-violent which makes it an invaluable resource for up-close study and modes of inspiration. The Kalapana region is also known for its dramatic ocean waters. Waves eternally crashing on the breathtaking lava cliffs move Daniel to give birth to some of his pieces. All in all, it has been said that people living on that side of the island live through a whole spectrum of passionate colorful emotions and creative forces due to the impact of the energetic forces of nature. Having done much healing after ending a very challenging decade long relationship, with the support of his brothers from the Mankind Project, lots of love from his current partner, and the inspiration of his two lovely daughters, Daniel has come through much transformation. This internal work has brought order and accountability to his life, and maturity to his work.
“My artwork is strongly influenced by the ever-changing relationship of the natural raw elements that make up this earth. When I tune into this sacred space, I understand the connection between the earth elements and my own, therefore bringing oneness and wholeness into my creative work. I love working with glass; the properties of liquid glass are very much like hot lava or water—adaptable, flowing and versatile. This makes it the perfect material to express the nature of the dynamic raw and liberating energy revealed in the Aina (land) on Hawai`i. 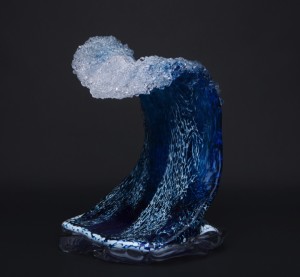 View more work by Daniel Moe by visiting his page on our online store here.