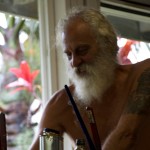 Avi Kiriaty was born in Israel, the son of a dabbling artist, and spent his youth as a keen observer of nature and people. He met his wife on a kibbutz and soon after moved to New Hampshire where they had their first child, Keytoe. Soon after, the Kiriaty family moved to the South Pacific in search of a warm, peaceful place amid nature. The first year was spent on Kauai, where Avi experimented for a time with oil painting. From there they moved to Hamakua side of the Big Island. His son, Jazz, was born on an old Hawaiian homestead there. Avi then moved to the Puna rain forest and began to live the life of an “artist”. His first works were sold at the Hilo Farmer’s Market, where his wife had been selling tye-dyed t-shirts. Ave included a few works for sale to no one’s surprise, they were an immediate success.
Since that time, Avi has continued to capture the Hawai’i landscape and his observations of its people in joyful paintings and prints. For a deeper study into the Polynesian culture, Avi and his family traveled to 19 different islands in French Polynesia and the Cook Islands. His work has been profoundly influenced by this journey. One example of this influence is Avi’s unique collection of Storyboards.
Avi’s paintings and prints hang in public and private collections throughout Hawai’i, on the mainland, and in Europe. He has been featured in numerous publications, on television, and has had several solo exhibitions. Kahala, one of the oldest Aloha shirt manufacturers, distributed a popular line of Aloha shirts incorporating Avi’s designs.

View work by Avi Kiriaty by visiting his page on our online store.