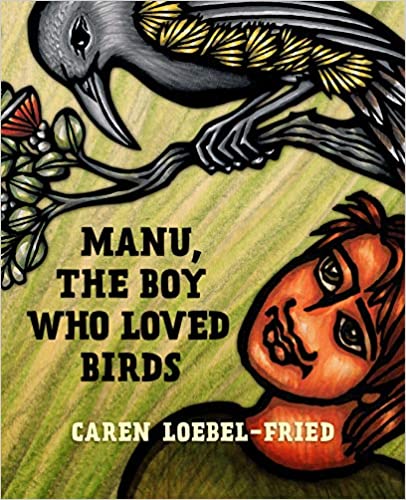 Manu, the Boy Who Loved Birds

Manu, the Boy Who Loved Birds

On a school trip to Honolulu’s Bishop Museum, Manu and his classmates are excited to see an ancient skirt made with a million yellow feathers from the ‘ō‘ō, a bird native to Hawai‘i that had gone extinct long ago. Manu knew his full name, Manu‘ō‘ōmauloa, meant “May the ‘ō‘ō bird live on” but never understood: Why was he named after a native forest bird that no longer existed?

Manu told his parents he wanted to know more about ‘ō‘ō birds and together they searched the internet. The next day, his teacher shared more facts with the class. There was so much to learn! As his mind fills with new discoveries, Manu has vivid dreams of his namesake bird. After a surprise visit to Hawai‘i Island where the family sees native forest birds in their natural setting, Manu finally understands the meaning of his name, and that he can help the birds and promote a healthy forest.

Manu, the Boy Who Loved Birds is a story about extinction, conservation, and culture, told through a child’s experience and curiosity. Readers learn along with Manu about the extinct honeyeater for which he was named, his Hawaiian heritage, and the relationship between animals and habitat. An afterword includes in-depth information on Hawai‘i’s forest birds and featherwork in old Hawai‘i, a glossary, and a list of things to do to help. Illustrated with eye-catching, full-color block prints, the book accurately depicts and incorporates natural science and culture in a whimsical way, showing how we can all make a difference for wildlife.

Caren Loebel-Fried is an award-winning author and artist from Volcano, Hawai‘i. She has written and illustrated several previous storybooks, including Hawaiian Legends of the Guardian Spirits, A Perfect Day for an Albatross, and Legend of the Gourd, all of which showcase the ancient art of block printing. Her books have won the American Folklore Society’s Aesop Prize for children’s folklore and the Hawai‘i Book Publishers Association’s Ka Palapala Po‘okela awards for excellence.

Be the first to review “Manu, the Boy Who Loved Birds” Cancel reply

Volcano Art Center will offer a series of beading workshops with Phyllis Cullen. The first, “Introduction to Beadweaving” happens on