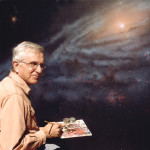 William K. Hartmann is known internationally for his astronomical research, writing and painting. He first came to Hawai‘i in 1964 where he lived alone on Mauna Kea to do early site testing for what later became the Mauna Kea Observatory. Currently he lives in Ka‘ū, teaches occasionally at the University of Hawai’i at Hilo, and is a resident of Arizona the rest of the year.
Hartmann says that he is creatively stimulated by the varied landscapes and weather patterns of the Big Island. He organized the first International Space Art Workshop at the Volcano Art Center in 1982. He has been painting outdoors from nature in Hawai‘i for many years, and tries to catch the essential quality of the Hawaiian landscape which he feels is missed in more stereotyped views of Hawaiian motifs.
He has participated in painting exchange programs in Moscow and the Crimea, and has twice been commissioned to do paintings for the NASA fine arts program. His paintings have been exhibited in the Smithsonian Air and Space Museum as well as in international exhibits. His artwork has been published and collected in the U.S., France, England, and Japan.
Asteroid number 3341 is named for Hartmann in recognition of his astronomical research which includes the currently accepted theory on the origin of the moon, and he was the first winner of the Carl Sagan medal from the American Astronomical Society for communication of scientific work to the public via his paintings and writing