Rod Cameron is no stranger to the East Hawai’i art scene: he has had four notable solo shows. About Volcano he says, “There is no place I know that is remotely like it in the world. Its great contrasts of violence and quiet solitude, clear blue skies and heavy ash clouds, rain forests and lunar landscapes are a constant challenge and a very great honor to paint.”
Rod’s initial studies in school centered on architecture, mechanical drawing, and writing. He began to teach himself to paint and draw but realized that “you’ll soon hit walls by strictly going it alone.” He began attending classes at The Otis Art Institute in Los Angeles and at the Art Students League in New York City. He wanted to work with master artists, so he did an apprenticeship in Palm Springs with Keith Ward, who is most famous for illustrating the “Dick and Jane” reading books. After that, he spent five months doing plein-air painting in isolated jungles and beaches near Puerto Vallarta in Mexico.
Island beauty and the lure of surfing brought Rod to Hawai’i where he began designing silkscreen shirts and created the first Diamond Head Crater Festival posters. Soon he was directing his own agency, East/West Arts, in California with clients like Warner Brothers, and Hasbro. The agency’s specialty in toys got Rod working in three dimensions and led to a number of U.S. patents for his inventions.
Currently, Rod works out of his Beach Road studio in the Puna District of Hawai’i. He recently won the People’s Choice award out of nearly nine hundred entries in Wailoa Center’s E Komo Mai exhibit, “The New Land”. 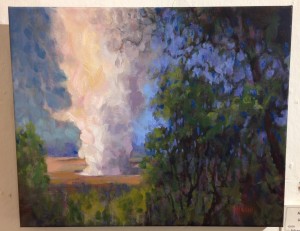 View more works by Rod Cameron by visiting his page on our online store here.