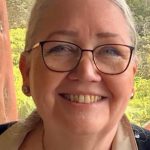 Since 1982, Kathy Long has called the Big Island “home” once again. Daughter of the well-known artist Mary Koski, she lived in Hilo until she was eight, when her family moved to the U.S. Mainland and later to Europe. There she graduated from one of the oldest schools in Scandinavia, and made her debut at the highly respected Waino Aaltonen Museum in Finland. That exhibit was the first of thirteen one-woman shows in Europe, followed by many more, in Europe, the U.S. mainland and Hawai`i, including two shows at the Volcano Art Center gallery.
In 1979, Kathy and her art historian husband Bertil moved to Houston, Texas to open a highly successful fine arts gallery. Nonetheless, they tired of urban life and moved to Waimea in 1982 where Bertil was curator of Richard Smart’s fabulous art collection at Parker Ranch until 2000.
Nearly everyone living in Hawai`i has seen at least one of Kathy’s masterfully executed drawings reproduced in countless publications as well as on the 2001 and 2002 Merrie Monarch Festival posters. She works from images she has photographed and then painstakingly and patiently imbues them with her love and respect for her subjects to create sensitive and exquisitely beautiful drawings.
“I am not trying to depict the past in my work, but rather to record the present for the future generations. That is not to say that the past is not the foundation for the Hawaiian culture today. I like to use the word kumupa`a, meaning firm foundation in ancient times. A culture that has a firm foundation in its past can stand tall and stable in the future.”