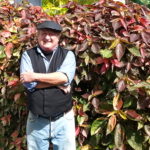 David Hayes was born and raised in Hawai`i and has lived here his entire life. He graduated in the class of 1978 from Saint Louis High School in Honolulu and received his Bachelor of Art Degree from the University of Hawai`i in 1985.

David has been a member of several artist guilds and conservation organizations throughout the years and has awards from several juried showings. He received a First Place award in 2006 for his Hawaii State Wildlife Stamp.

Over the years he has pursued his interest in cross-country backpacking and has explored the most remote regions within the state. Through his experience and research he has become thoroughly familiar with the native and introduced biota of the Hawaiian Archipelago.

View work by David Hayes by visiting his page on our online store here.