Jeremy Bigelow grew up in Massachusetts, and became interested in woodworking at the age of 10.  In shop class, at age 15, he knew he wanted to become a woodworker.  After high school, he became a machinist by trade, and put together a set of woodworking machinery. He began designing and building furniture pieces as a second job.

In 2005 Jeremy and his family moved to the Big Island. Having access to the many beautiful exotic and indigenous hardwoods in the islands is a woodworker’s dream.  Here he became involved in custom home building, designing and building cabinetry, entryways, furniture and wood art pieces.  Moving to Volcano in 2012 brought inspiration and vision,  Jeremy states, “Being able to create in the presence of the majestic Koa and Ohia trees of Volcano is truly a spiritual experience. The reclaimed pieces of these sacred trees will speak their new form to those open to listen.” 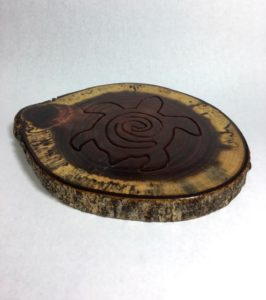 Jeremy’s Artwork is available in: