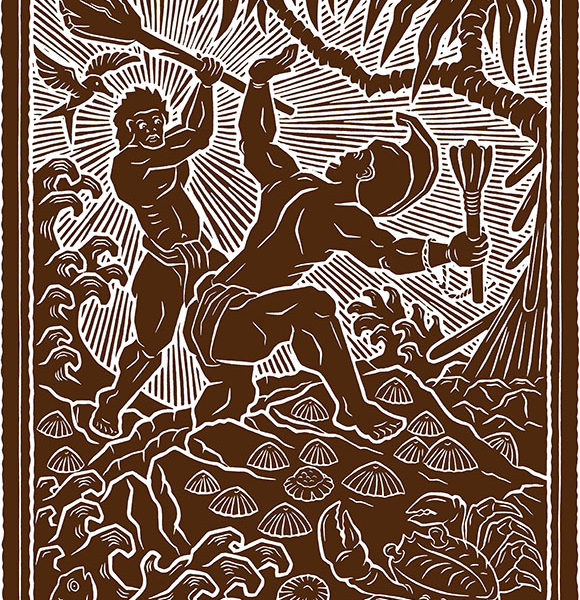 L109, Kamehameha And The Splintered Paddle, giclée by Dietrich Varez

Kamehameha And The Splintered Paddle, print L109, by Dietrich Varez. A story suggests that on one occasion, Kamehameha I was fighting in Puna. While chasing two fishermen (presumably with the intention to kill them), his leg was caught in the reef and, in defense, one of the fisherman hit him on the head with a paddle, which broke into pieces. Kamehameha was able to escape (because the fisherman fled, rather than finishing him off.) The story continues that Kamehameha learned from this experience and saw that it was wrong to misuse power by attacking innocent people.Years later, Kamehameha summoned the two fishermen.  When they came, he pardoned them and admitted his mistake by proclaiming a new law, Kānāwai Māmalahoe – Law of the Splintered Paddle.

This is a giclée reproduction print on archival paper.

You can learn more about Dietrich Varez by visiting his bio page here.

Be the first to review “L109, Kamehameha And The Splintered Paddle, giclée by Dietrich Varez” Cancel reply

Volcano Art Center is proud to offer the hands-on “Introduction to Sogetsu Ikebana” workshop with Nancy “Sorin” Locke on Thursday,

Big Island artist and instructor Patti Pease Johnson is back to teach the popular Paint Your Own Silk Scarf workshop on Saturday,

Join artist Mary Milelzcik for the “Introduction to Paper Making” workshop on Saturday, September 12, 2020, from 10am – 3pm at Volcano