Volcano Art Center is proud to announce the next fine art exhibition to be displayed at the Volcano Art Center Gallery in Hawaiʻi Volcanoes National Park from February 16th – March 24th, 2019. The exhibition titled NIUHI-SHARK honors Kamehameha The Great in both paint and prose with original paintings created by Carl F. K. Pao paired with selections from the book Kamehameha–The Rise of a King by Kāwika Eyre.

The exhibit in commemoration of the 200th anniversary of King Kamehameha’s death will open on Saturday, February 16th with artist and author present at an opening reception from 5 to 7pm. The public is also welcome to attend a panel discussion the day before on Friday, February 15th at 5:30pm at the Volcano Art Center’s Niaulani Campus in Volcano Village.

The year 2019 marks the 200th year since the death of Kamehameha the Great. His beloved wife Ka‘ahumanu is said to have tattooed the exact date on her arm: May 8, 1819. 1819 was also the year of the breaking of the ‘ai kapu which freed men and women to eat together. Later that same year, Chief Kekuaokalani, Kamehameha’s nephew fell with his wife Mānono on the battlefield at Kuamo‘o in a last and valiant attempt to defend the kapu system. The year 2019 is thus one of reflection. 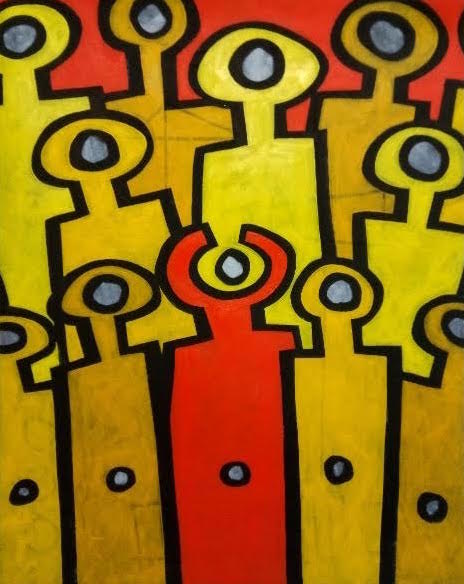 Hawai‘i Island is not only the place of Kamehameha’s birth, it is also the beautiful and dramatic setting of much of his life’s story, the source of his power, the home of his final days, and the hidden place of his bundled bones. It is fitting that several civic and social groups including ‘Ahu‘ena Inc., Royal Order of Kamehameha I, Māmalahoa, Hālau I Ka Leo Ola O Nā Mamo, Kamehameha Publishing, Volcano Art Center, Kamehameha Schools Hawai‘i, East Hawai‘i Cultural Center, Kohala Hawaiian Civic Club, Malu ‘Āina-Center for Non-violent Education and Action and Pu‘u Koholā National Park have joined efforts to mark the year.

This commemorative exhibit showcases Pao’s artwork with key excerpts from the book Kamehameha–The Rise of a King and illustrations created for the book by artist Brook Parker. The collection provides viewers a visual experience of important events in King Kamehameha’s life and the fascinating perspective from two very different styles of art.

David Kāwika Eyre has taught Hawaiian language at Kamehameha Schools for 23 years. His book Kamehameha—The Rise of a King won a Palapala Po‘okela Award for excellence in Hawaiian culture, a Nēnē Book Award, a Moonbeam Children’s Book Award, and a Read Aloud America selection award. Eyre is the author of 7 books, the most recent being a collection of haiku poems entitled not a one, published by Red Moon Press in 2018. He will be signing copies of the award-winning Kamehameha book which provides the framework for this exhibition on Sunday, February 17th from 11am -1pm at the VAC gallery.

Born and raised on the island of Oʻahu, Carl F. K. Pao graduated from Kamehameha Schools in 1989. He earned a BFA at the University of Hawaiʻi at Mānoa in 1994, with an emphasis in Ceramics earning an Outstanding Senior Ceramic Student Award. Carl received his masters of fine arts with first-class honors in 1999 from Elam School of Fine Arts at the University of Auckland, Aotearoa (New Zealand). He returned to Hawaiʻi in 2000 to take his a full-time teaching position at the Kamehameha Schools high school in the Visual Arts. In January 2018, Carl transferred to the Keaʻau campus. Outside of his teaching schedule, Carl continues to create his own art.

A panel discussion beginning at 5:30pm on February 15th at VAC’s Niaulani Campus in Volcano Village kicks off the events and programs which support the exhibition. All are invited to hear different perspectives on the life of Kamehameha, in particular his complex relationship with the Ka‘ū chief Keōua. The exhibit and supporting events promise paint, prose, protocol and conversations providing cultural, historical, and educational experiences.

The Volcano Art Center is honored to host the exhibition, NIUHI-SHARK: Honoring Kamehameha the Great in Paint and Prose through March 24th, 2019. The exhibition is planned to expand and move to the East Hawai‘i Cultural Center for Merrie Monarch Week, and will then possibly travel to the island of Oʻahu to be included in the Hawaiʻi Book and Music Festival.