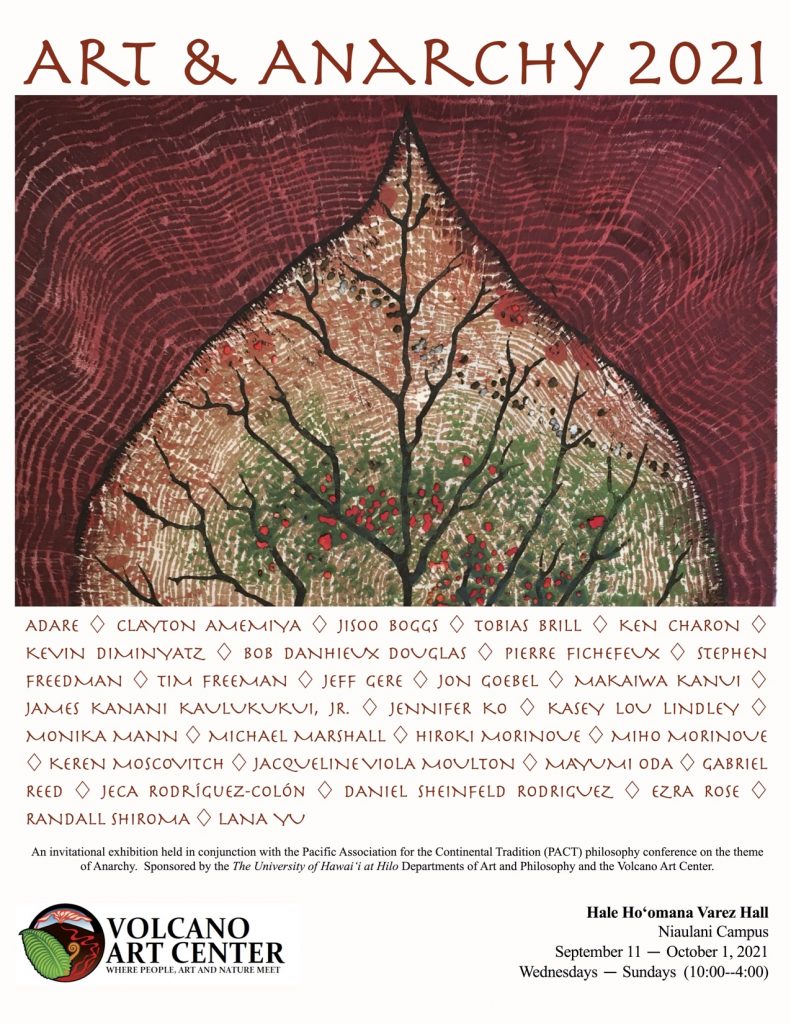 The Volcano Art Center proudly announces a new exhibition, Art & Anarchy, at the Niaulani Campus in Volcano Village.  The Exhibition is sponsored by The University of Hawaiʻi at Hilo Departments of Philosophy and Art in conjunction with the Pacific Association for the Continental Tradition (PACT) philosophy conference focusing on the theme of Anarchy. Opening to the public on Saturday, September 11th and continuing through Saturday, October 1st, the show may be viewed in person Wednesday – Sunday, 10 am – 4 pm at the Volcano Art Center’s Niaulani Campus (19-4074 Old Volcano Rd.)   Shop the exhibit here.

The three-week event features invited artists from the US mainland and Hawaiʻi Island,who were asked to submit works of art which engage the theme of anarchy.  Since its origins in 19th century Paris,
anarchism has influenced the visual arts in diverse ways and continues to do so as demonstrated by thiscollectionof one-of-a-kind works which provide visual and intellectual stimulation on the subject.

As stated by Tim Freeman, Teacher of Philosophy at UH Hilo, “anarchism, as a philosophy and political movement developing in Paris in the mid 19th century, was never really advocating a descent into disorder and chaos, but rather the liberation of humanity from the oppressive order imposed by religion, capitalist economics, and the state as it then existed.  What the anarchist philosophers were advocating was a new kind of order.”   As Pierre-Joseph Proudhon, the first modern political philosopher to declare himself an anarchist, and considered the “father of anarchism,” once wrote: “Anarchy is order without power.”  The American anarchist Emma Goldman later states: “Anarchism stands for a social order based on the free grouping of individuals for the purpose of producing real social wealth, an order that will guarantee to every human being free access to the earth and full enjoyment of the necessities of life, according to individual desires, tastes, and inclinations.”

The mixed media exhibition features original paintings, prints, sculptures, and ceramics by both professional, amateur and student artists who continue to investigate the same issues that motivated the original anarchist movement and in many ways are even more critical today. The Art & Anarchy exhibition can be viewed in Dietrich Varez Hall in the Hale Hoʻomana building at VAC’s Niaulani Campus.  VAC is currently following all CDC guidelines and social distancing protocol. Be prepared to wear a mask and keep a safe 6 ft. distance from others within the gallery. Additionally, VAC gallery is mandating a max. occupancy of 10 people within the gallery at one time (you may be asked to wait outside if the gallery is full), the use of hand sanitizer at the entrance, and regular cleaning of highly touched surfaces by VAC staff and volunteers.