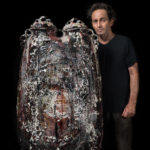 Stephen Freedman trained since childhood as a ceramicist. He worked in studios and industry on several continents to develop a repertoire of techniques which facilitate the expression of his diverse interests, ranging from formal pottery in the Sino tradition, to conceptual sculpture, which he has exhibited in galleries and museums throughout the world since 1975.
His earliest works were symmetric porcelain vessels, wheel-thrown from a single piece of clay using a “dry” throwing technique (minimizing the use of water) to facilitate large scale, thin-walled forms. Subsequent elements of sculpture utilized rectilinear forms made through a process of model making and press molding, techniques borrowed from the Sung Dynasty tradition which inspired much of his seminal form and glaze creation.
A published author, Freedman’s written word, imprinted upon and pierced through the walls of ceramic vessels characterized mid-career works, exposed in major galleries and solo museum exhibitions. The works were purchased by numerous permanent public and private collections, his works referenced in various scholarly as well as popular publications.
Freedman’s current sculptural works utilize an amalgamation of techniques and glazes derived from his personal development. The vessel remains an element for construction in fabricated forms, deconstructing and reconstructing society’s oldest metaphor for the body–the vessel–into personal models of mind and experience.