Joe graduated with a Bachelor of Arts degree in Art from the University of Hawaii at Hilo. He describes his artistic growth and chosen process:
“Born in the shadow of Tulsa OK, 1970. Farm boy by nature but grew up the king of dirt ball wars. My interest in art began early, very early. My father was the developer for the Tulsa police crime lab and I spent many a summers hiding out in that lab. I was given a tall stool to watch all of the processes but I was told to close my eyes when some of the final crime scene prints were washing…(I peeked). I remember the fascination that 7 year old had in a place that few children were allowed. My father’s darkroom fascinated me, not only in a visual sense; but it also imbedded within me a memory of the non-visual stimulants associated with a darkroom. The feeling of trusting darkness, the coolness of the constantly flowing water, and the smells that would creep around from the different chemicals. Many years later in a college photography class, this imbedded memory was awakened. It allowed me to bring back to the medium the playfulness of a child’s vision from which it was personally discovered. It’s from this that my prints say what they need to say without the complexities of the critically educated adult eye. The cyanotype process allows this to happen in the very nature of the final print. But like anyone true to their vision, the physical deconstruction and reorganization of the print is where the excitement lies for me. I’ll never claim to be a purist, only an artist. A maker of things.
During the early years of photography, many techniques were tried to achieve some sort of clear visual image. As the next new process reached a higher level of clarity and ease of multiple reproductions, the previous method was abandoned. These abandoned methods came to be known as alternative methods. I work within one of these processes: The Cyanotype.
Cyanotype printing involves treating a surface with iron salts that reacts to UV light. A surface is coated by hand with the liquid mixture. A negative the same size as the final image is placed over it. This is set between marine plywood and plexi-glass with clamps. It is then brought out to expose in the sun. After the exposure, the paper is washed and allowed to dry. The resulting image is viewed as a black and white but with the black being replaced with a Prussion Blue. The final print is then worked by hand with the application of whatever it seems to need; minerals such as Mica and Silver leaf or multiple ink washes with different pigments folded in.
The images I work with are those that I come in contact with during my daily living. The image is one that presents itself just out of the normal frame of vision. It makes me stop and wonder. Before I look too silly just standing there staring and wondering, I take a picture.” 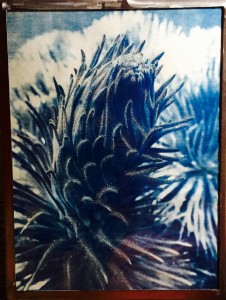 View more works by Joe Laceby by visiting his page on our online store here.