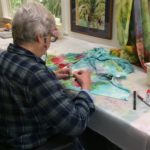 Clytie Mead has been painting in watercolor since she was a child. Her parents had an architectural rendering studio in their home, where they worked in watercolor. She was often given an old brush and some paint and paper to keep her occupied. She grew from then to earn a BFA from Carnegie Mellon University and an MA from Cornell. She has been working in watercolor on silk since 1999 when she studied with well-known Chinese painter, Jane Chao. She believes that working with other artists and sharing new ideas and techniques is a valuable tool in keeping her work fresh. She has had her own shows at the Wailoa Center, the Firehouse Gallery, and the Volcano Art Center. She has won several awards, including Best in Show for the Helen Cassidy Show at the Firehouse Gallery in Waimea.
Clytie enjoys studying the Japanese tea ceremony, earning her tea name. She teaches reading to adults. She loves opera and travel, and enjoys combining the two when possible.
Watercolor on silk is an ancient Asian technique. Clytie brings a lifetime of experience as well as her own Western point of view to her work. Each piece usually takes 20 to 30 hours to complete. She paints with regular watercolors and brushes on imported Chinese silk which has been specially treated to resist blurring or running.
“Ever since I first came to Hawai`i in 1986, I’ve been inspired by the lovely natural surroundings. In the early 1990’s I had the opportunity to work on a native tree study in Kulani forest. Since then I have wanted to express my deep appreciation for the beauty of the many native Hawaiian plant species, and to bring them to the attention of people who may never have had a chance to see these rare and sometimes endangered plants.” 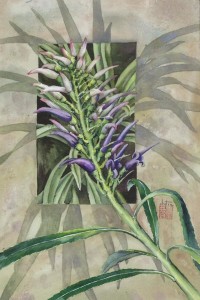 View works by Clytie Mead on her page on our online store.