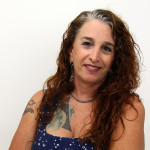 Long known as a skilled potter, Amber uses two specialized techniques that take her ceramic pieces beyond the usual. The basic process calls for a “bisque” firing to remove moisture from the formed piece, a second firing to get it red hot for a “reduction” firing when the hot piece is put into a closed vessel with combustible materials to ignite them.

The Kosai technique adds another firing in which metallic salts vaporize, producing an archival molecular bond that imparts the subtle iridescence you see on pieces here. The “naked” raku technique uses a slip of clay and water to cover or clothe the piece after its bisque firing and glazing. The slip acts to resist the heat and comes off during the final firing, leaving the piece naked-and handsomely so.
Amber most recently developed a technique she calls “Naked Fauxku” because it is naked (sans glaze) yet is a faux process that attempts to emulate the look of raku. It is done in an electric kiln and is high fired. After the first firing, she masks off areas that will have glaze accents. She then applies a thick slip over the entire piece. The slip dries and creates cracks. She then airbrushes pigment into the cracks. When dry, she uses a pick to knock off the slip. Sometimes a third firing is done with a silver luster for metallic accents.
Originally from California, Amber Aguirre holds a masters degree in art education and was a high school teacher before moving to Hawai’i and pursuing art full-time. She has exhibited in many juried shows across the nation and has won a variety of awards for her work.