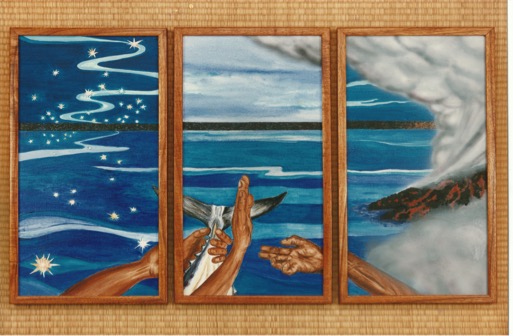 Paʻaiea Panel 1.:  This fishpond in Kona was 600 acres with a wall 5 miles long.  A Hawaiian poetical saying speaks of this pond: “O na hōkū o ka lani luna, o Pa’aiea ko lalo. – The stars are above, Paʻaiea is below.” This likens the stars in the night sky to the little islands that shine in the pond below.

Paʻaiea Panel 3.: That night, the old woman revealed herself as Pele, the Volcano Goddess. She sent a lava flow to destroy the fishpond.

In ancient days, fishermen often shared a catch of fish from the ocean.  Elders were and are respected.  It continues today that if an old woman asks for simple generosity, it is good and wise to be generous. Beware she might be Pele.

This acrylic painting is part of the Fishpond Legends:
All fishponds have guardian spirits.  They are shape changers that can take multiple forms.  They are often moʻo, giant lizards. Moʻo are both benevolent and terrifying.  They did not like to see unkindness, greed or haughtiness. There are many kinds of moʻo. Fishpond moʻo were female.

To learn more about Carol and her artistic process visit her bio page here.