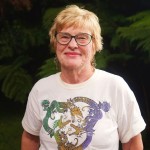 Born in Pittsburgh, Pennsylvania, Ginny Seng-Bush moved to
Honolulu in 1971. She felt an afﬁnity with the Volcano area from the ﬁrst time she visited it in 1973 and vowed to live there one day. In 2000 she retired from her job as a civilian computer analyst for the U.S. Air Force and now makes her home in Volcano Village on the Big Island of Hawaii. Primarily self-taught, she studied oil and acrylic painting at the Honolulu Academy of Arts and watercolor painting at the Volcano Art Center in Hawaii Volcanoes National Park. She gets her inspiration from the cool, verdant, and peaceful rain forest that surrounds her studio and from the astonishing and ever-changing volcanoes that are literally in her backyard. She works mainly in oil and watercolor. A three-time survivor of breast cancer, Ginny largely credits her recovery to the serenity and healing energy of her mountain retreat.

Ginny’s paintings have been in group exhibitions in Hawaii, including the East Hawaii Cultural Center in Hilo and the Volcano Art Center. In addition, her work is in private collections in Nevada, Pennsylvania, Hawaii, California, Oregon, Florida, Colorado, and Arizona.