Robert Weiss has almost 40 years of experience as a professional artist in the commercial and fine art fields. “As early as I can remember I wanted to be an artist. My grandparents were painters and ceramic artists; my father was a writer and journalist, so my desire to become an artist was encouraged and supported,” Bob says.
He studied illustration, graphic design, and printmaking at Pratt Institute in Brooklyn, NY, and worked in New York City as an advertising art director and studio artist. In 1985 he started practicing the art of scrimshaw and began showing works at the Mystic Maritime Gallery in Mystic, CT. Shortly thereafter, Bob left the commercial art world behind to work at scrimshaw fulltime. At about the same time he began a study of Classical Realism at The Reilly League of Artists in White Plains, NY, attending daily painting and drawing sessions.
He is internationally known as one of the foremost scrimshaw artists in the world, and has received numerous awards for his work in the medium. In 2006 he and his wife, Gail, moved to the Big Island of Hawaii. Inspired by the beauty of the island he began to paint ‘en plein air’, a French expression which means “in the open air,” and is used to describe the art of painting outdoors. Much of his work is devoted to landscape painting, and lately he has been drawn to paint the old houses and industrial infrastructure from the bygone plantation era on the Hamakua Coast. “There is a certain beauty and sadness in these crumbling structures, and I’d like to preserve a bit of it in my paintings before they are gone”, he says. Bob and his wife are also avid bird watchers and he has recently begun a series of works depicting the remaining indigenous birds of Hawaii. 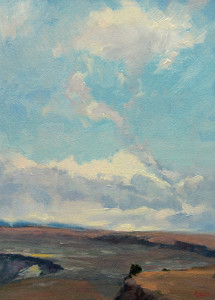 View more works by Robert Weiss by visiting his page on our online store here.