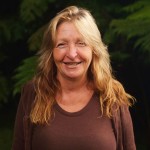 Originally from Oregon, Margaret Lynch began dividing her time between Hawai`i and fishing in Alaska in 1973. She did that until 1989, when she decided not to go back to Alaska again, and settled on O`ahu.
A friend invited Margaret to visit the Fort Shafter Craft Center where a raku workshop was being taught. Within a month, she had bought herself some clay and was attending workshops. A fast learner, she was teaching a raku workshop at the craft center in less than a year, and also taught hand-building during her tenure at the craft center. She was also group leader for the Raku Ho`olaule`a on the beach for two consecutive years and joined Hawai`i Craftsmen and was a volunteer at many of their functions.
Margaret has attended ceramic workshops in addition to classes at the University of Hawai`i and Leeward Community College where she studied under Russell Wee.
Since moving to the Big Island in 2001, Margaret’s work has become increasingly nature-centered, as her lovingly sculpted bas relief pueo (owl) and honu (turtle) on hand-built vessels attest. While she continues to enjoy making her raku “Lava Hearts” and “Moon Rattles,” she is venturing into pit-firing and sculpting custom tiles. Margaret’s work was featured in a two-person The Spirit of Clay exhibit at the Volcano Art Center Gallery in 2003. Margaret lives and works in the Puna District of the Big Island.

Care Instructions: Raku-fired pottery is not waterproof, but can be made so with several coats of a product like Thompson’s Waterseal. Do not use for food.