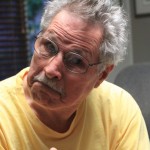 John D. Dawson was born and raised in San Diego, California. With the complete support of his working-class parents they helped him to follow his dreams of a career in art. John graduated from the Art Center School, Los Angeles, California which is now The Art Center College of Art and Design established in Pasadena, California. John spent time in the Army Reserves while he worked on the beginning of his art career. Detroit, Michigan and some automobile art kept him occupied for a year after college graduation. He then returned to San Diego and did advertising art full-time for sixteen years while also doing free-lance illustration jobs on the side.
For the past thirty years John has completed major assignments for the United States Postal Service, National Geographic Society & National Geographic Magazine, National Wildlife Federation & Ranger Rick Magazine, Audubon Society and Audubon Magazine, United Nations, University of Hawaii at Hilo, Imiloa Astronomy Center among many other clients including private commissions. During the most recent twelve years John has worked continuously with the USPS. The “Nature in America” series of twelve individual panes depicting various bioms across the US is one of his proudest accomplishments. This is in addition to a majority of the art displayed in the renovated Kilauea Visitor Center at the Hawaii Volcanoes National Park. Currently John continues to work on his long-term project which will show ﬁfty years of his drawings and other various forms of presentation. He loves working on his original miniature paintings showing the natural history of Hawaii, speciﬁcally the birds and plants of Hawaii Volcanoes National Park. Periodically, he still takes on illustration assignments. John and his wife Kathleen have lived in Hilo for over twenty years. 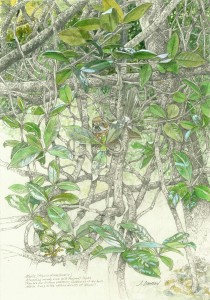 View more works by John Dawson by visiting his page on our online store.