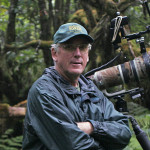 1974, Jack Jeffrey began serious nature photography while working as a wildlife biologist, watching many of Hawai’i’s forest bird populations decline. At the time, there were few good photographs of many of the species, and none at all for some species. Jack set about correcting that situation, and it has become all-consuming for him. His life’s work has continued in that direction; helping to inform and educate the public about the plight of Hawai’i’s native flora and fauna through photography.

Jack uses Canon digital cameras, a tripod, fill flash (if the need arises), and a Canon 500 mm f4 as his lens of choice for native forest birds. Each image represents hours, often days, of waiting, even with Jack’s specialized knowledge of bird behaviors.

He is co-author of several books, and his photographs have been featured in numerous local, national and international magazines, books, and calendars.