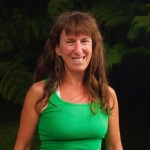 Caren Loebel-Fried has long been fascinated by cultures living “at one” with nature, and the kinship between people and nature that for most of human history served to sustain people as well as their animal and plant resources.” Her art is inspired by the natural world of Hawai`i and the legends told long ago by the people who settled in Hawai`i. She loves exploring the storied places of her island home, and her work is supported by extensive research at the Bishop Museum Library and Archives in Honolulu.
Caren is a second-generation carver and learned the art of block printing from her mother. Her prints are exhibited and collected throughout the world. Caren has to date written and illustrated six award-winning books for children and adults on the legends of Hawai`i, including two books in collaboration with Hawaiian Treasure Aunty Nona Beamer. Accolades for Caren’s books and art include the American Folklore Society’s Aesop Prize for Children’s Folklore, the Hawai`i Book Publishers Association for Excellence in Children’s Illustration, Literature, and Hawaiian Culture, and the Bookbuilders West Competition.
Caren’s original hand-pulled linocut prints are printed by hand, not reproduced digitally or by a copier. First, she does a series of preliminary pencil and ink sketches. When she is satisfied with the design, she transfers it to a linoleum block and then carves away the negative spaces. Then she inks the block, lays a piece of acid-free paper on it, rubs the paper down, and finally pulls the print away. She hand colors some of her prints with watercolors, and no two of them are exactly alike. Some of Caren’s original prints are available as limited edition giclee prints. These museum quality re-productions are printed on acid free paper with pigment based inks, done under the supervision of Caren for accuracy of color. 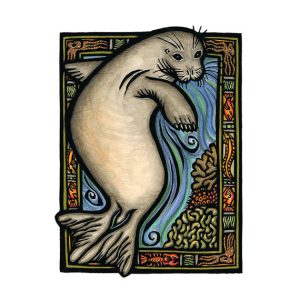 View work by Caren by visiting her page on our online store.

Get ready to explore “The Wonders of Watercolor” with Nancy DeLucrezia, an eight-week workshop series on Wednesdays starting March 4 –

You can learn how to make your own classic woodblock image with Glenn Yamanoha in the “Mokuhanga: Traditional Japanese Woodblock